A story requested by the fantastic crew of Hemisperic Views @HemisphericViews on micro.blog.

As I get older, there are many things that trigger a feeling of nostalgia. There are many past moments that are triggered by sights, sounds, smells, objects. But the one item that is most appropriate for Nostalgic November is my collection of Doc Savage paperbacks - a collection that was started on a rainy November afternoon, while visiting relatives in California.

I was always a voracious reader, and on this particular rainy November day, I had run out of reading material on this trip - I had not expected to be stuck in a house all during my stay at Grandma’s. My dad suggested we head to the store to check out the paperbacks - I think he had run out of stuff to read, as well. When we got to the paperback section (remember spinning racks of paperbacks?), he grabbed a thin paperback with a large bronze man on the cover and said: “Here, I think you might like this!” There were two different books about this character, so I got both - and my ten year old self got hooked.

Doc Savage was a hero in the “pulps” of the 30’s and 40’s - some claim he was the first “superman” of either the pulps or comics. He had a “Fortress of Solitude” before Superman, his first name was Clark - you get the idea. 181 stories were originally published, and I had gotten hooked on the reprints done by Bantam, starting in the 1960’s. They were at the low 50’s in the reprints when I started collecting, and when I got back home, I spent the next few years scouring the used book stores for all the earlier ones I could find, and buying the new ones when they were released. I had an almost complete collection before other teenage pursuits (ahem) took priority over collecting books.

For some reason, I never got rid of those books. I got rid of everything else (a few times over), but never those books. Years later, I decided to complete my collection, and read the stories that I had never read. Every time I reach for a book, or look at my collection on the bookshelf - every time - I am reminded of that rainy California day with my dad, and the start of an adventure in reading, collecting, and enjoying the stories of Doc Savage and his aides.

The books that started it all: 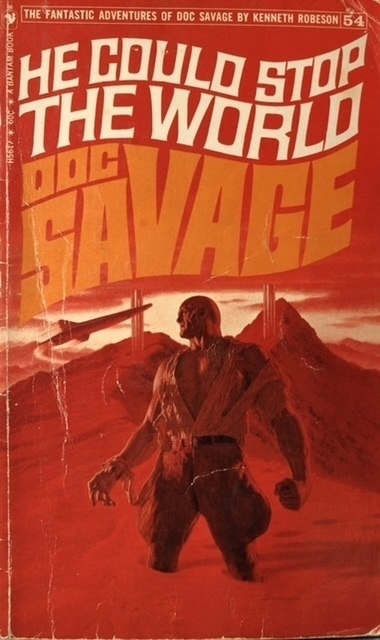